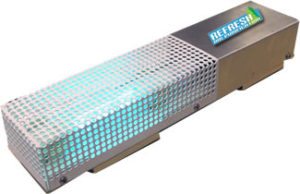 The PHI unit – Air Purification System is designed for usage as a commercial air cleaner with HVAC systems, and is generally mounted right within some component of the HVAC unit or within the ductwork, to keep clean air circulating throughout your home or office building. Primarily designed as a UV light cleaner for package systems, it has numerous other applications because of its magnetic mount feature, which allows it to be installed in even the most difficult locations.

One of the biggest problems with any HVAC unit is that over time, debris will accumulate in the ductwork as it’s brought in from external sources, and then because of the circulating nature of the system, all that debris has the potential to be carried throughout the home or office. This can be especially harmful for people with respiratory diseases, because they breathe in those contaminants.

The PHI Air Purification System effectively kills up to 99% of bacteria, mold, and viruses, upon contact, so that these cannot be passed on to occupants of the building, and the system is extremely effective in carrying out this function. It also significantly reduces any unpleasant odors that may be lurking in the ductwork or other parts of the system. This includes volatile organic compounds (VOC’s) and other chemical odors which have been emitted as gases, and which can seriously degrade indoor air quality.

The PHI Air Purification System requires no tools for installation, because it has magnetic feet which make it easy to install in almost any location. However, this should be considered a benefit for the professional HVAC specialist, since it is recommended that either an electrician or HVAC professional manage the actual implementation.

Photo Hydro Ionization (PHI) cells make use of ultraviolet (UL) light which is directed at surrounding contamination in order to destroy it. While ordinary ultraviolet light loses a great deal of its inherent energy when positioned close to the contamination source, PHI cells have an entirely different UV light source which maintains all its potency, even at close quarters.

The UV light in PHI cells activate a quad-metallic compound which coats a grid surrounding the UV bulb itself, and when this happens the ductwork where the unit is positioned becomes flooded with hydroxide ions, super oxide ions, ozonide ions, and hydro-peroxides. This bombardment of contaminants effectively kills or sterilizes them on contact, and they revert to harmless oxygen and hydrogen atoms. This is an advanced oxidation process that ordinary UV lights simply do not have, but which has been perfected in PHI cells.

As previously mentioned, this system has numerous applications, because of the effectiveness of its air quality improvement, and also partly because of its tremendous versatility. In addition to small package products and vertical stack units, it can be used in conjunction with gas package products, and as a rooftop cleaner. In places where modification the HVAC unit is not allowed, for instance in rental units, it can be positioned at any location where it comes in contact with the contaminants to be removed. Where ductwork is very difficult to access, the PHI Air Purification System can be a life-saver, because it can be attached to the HVAC blower unit itself if necessary.

The Refresh Package PHI Unit Air Purification System has a number of useful applications, including in vertical stack units, rooftops, gas package products, locations where ductwork is inaccessible, and also in places where modification to the HVAC system is not allowed, for instance, rental units. Primarily designed for package systems, this air purification system has also been applied in a wide variety of situations because of the versatility offered by its magnetic mount installation.

Because its magnetic feet can attach to blower units without any type of fasteners being used, installation simply couldn’t be any easier, or more efficient. In fact, any kind of application where ductwork is hard to get at would be an ideal situation for the package PHI unit. It is currently manufactured in three different sizes – 5″, 9″, and 14″ – which are intended for use with package products ranging from 1 1/2 tons to 20 tons.

Indoor air quality is greatly improved by the air purification system employed by the Refresh Package PHI Unit, with as much as 99% of all bacteria, viruses, and molds being eradicated from the living space serviced by one of these air purifiers. In addition, nasty odors and volatile organic compound odors are greatly reduced, so that the breathable air is not only healthier, but much fresher and more pleasant.